Brownies Take a Walk on the Wild Side at Chester Zoo 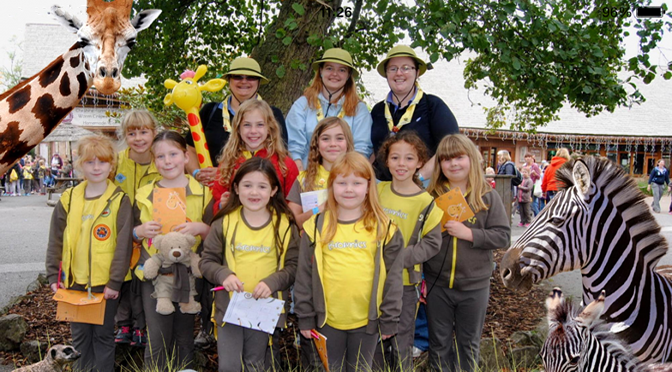 Thousands of Brownies from all over the North West of England travelled to Chester Zoo for a brilliant birthday party that included a unique after-hours experience, enchanting lantern-lit walk and massive girl-only sleepover at the zoo.

Hundreds of local girls from across the county, all aged 7-10, joined a four thousand strong crowd that flocked to the UK’s number one wildlife attraction to celebrate The Big Brownie Birthday over the weekend.

The young adventurers received a once in a lifetime opportunity to enter the zoo after the gates had been closed to the public during a Brownie-only event. The girls explored the zoo after hours when they got the chance to come face to face with some of the zoo’s 11,000 animals.

Millie Thompson, 8 year old Brownie, from 41st Rochdale Brownies, said: “It was so much fun. We got to sleep at the zoo and I was excited to see the animals. We even got to go on a lantern walk at night time and I made my own lantern to carry – it was so cool.”

Maisie Harrison, aged 8 from 43rd Rochdale Brownies said: “It was amazing seeing all the animals up close with so many Brownies from everywhere! Best day ever to be a Brownie!”

Nine year old Brownie, Katie Lee, from 60th Oldham Brownies said: “It was the best trip ever and the Lantern Parade was cool”.

Once the girls had explored the zoo, it was time to join a specially organised lantern walk where girls watched in amazement as animal lanterns came alive in a magical light display to celebrate The Big Brownie Birthday.

At the end of the lantern walk, Brownies were asked to hang their Brownie Wish on a specially prepared wishing tree to share what they would wish for if they were a Brownie in 100 years’ time.

Sarah Barnes, Event Organiser, and also leader from Lancashire South East County, said: “It’s been a fantastic year of celebrations for The Big Brownie Birthday and Wild Encounters has been a huge a success. We’ve been able to give so many Brownies the opportunity to stay away from home for the first time and in such a unique location.”

Wild Encounters @ Chester Zoo was held to mark the 100th birthday of the Brownies in 2014, which has seen girls all over the North West celebrate by tackling challenges big and small – from carrying out acts of kindness to rafting, rock-climbing and zip wiring and raising awareness of issues affecting girls in the UK and worldwide.

Suzanne Spencer, Event Organiser said: “Wild Encounters has been a once in a lifetime opportunity for so many people. For the Brownies who got to take part, and attempt a world record, to the volunteers who helped to make it happen, we’ll never forget it. It’s been such a unique way to celebrate 100 years of Brownies!”