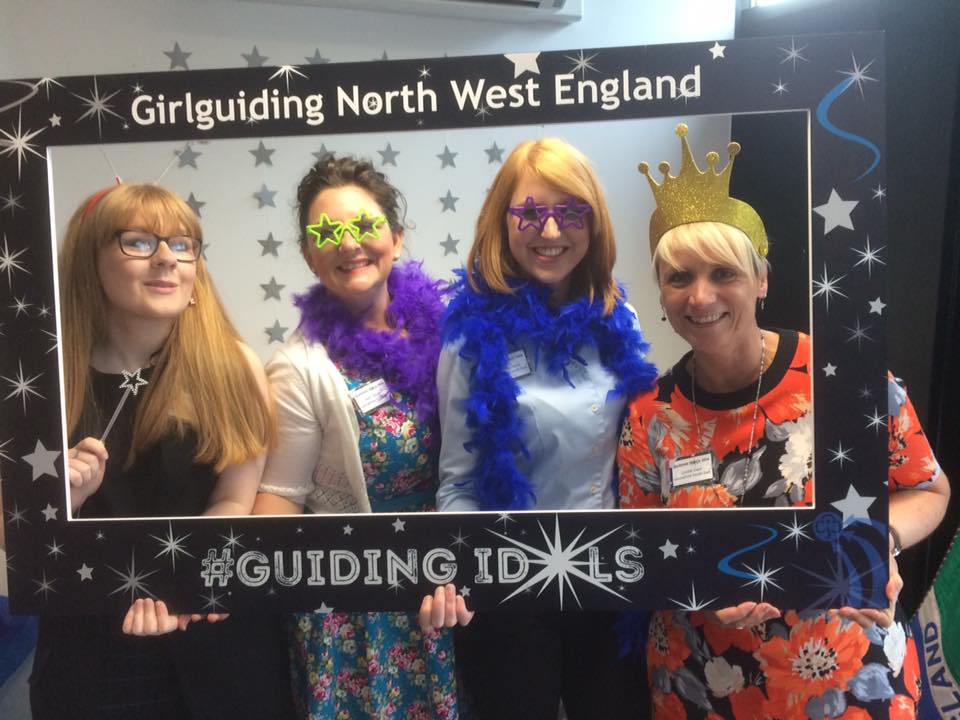 Five Girlguiding volunteers from across Lancashire South East received an unforgettable surprise when a group of girls and young women recognised them for their volunteer efforts.

They have recently been named as some of 64 ‘Guiding Idols’ in Girlguiding North West England – a campaign led by the regional charity to recognise its volunteers for their efforts. This year’s celebration is extra special, as it falls within The Senior Section Centenary. Girlguiding’s Senior Section is open to all girls aged 14 to 25, offering a host of amazing opportunities told older girls in guiding – from international travel and outdoor adventure sports to peer mentoring, advocacy and leadership skills.

Girlguiding North West England members were asked to nominate a Guiding Idol – a volunteer that they felt was an inspirational role model. Following the nominations, a youth panel of girls and young women, aged 5 to fourteen, were tasked with the difficult challenge of selecting nominees from each of the charity’s seventeen guiding counties.

The youth panel announced that they had selected 64 volunteers from across the North West and that each Guiding Idol would be invited to attend a special celebration afternoon on June 12th 2016 at Girlguiding North West England’s Region Headquarters in Preston.

The event included thought-provoking activities, a mocktail masterclass for the Guiding Idols and an afternoon tea with a twist. Amid the celebrations, the volunteers received a Region Thanks badge from the Region Chief Commissioner, Julie Bell, and had yet another surprise when a plaque was unveiled in the Region Headquarters’ garden – a memorable tribute that named all 64 Guiding Idols for their achievement.

Beth Tennant, a Leader with Heywood Senior Section said: “Working with the older girls in Senior Section, is just so incredibly rewarding, you see them grow and flourish from awkward teens into beautiful young women. The world at their feet and a wealth of opportunities open to them. I love that with a little encouragement they blossom into confident young leaders, or prepare to go on international opportunities. Young people are often thought of so negatively in the press and I am proud to be a leader working with a group of girls who are people you want to be around and friends with. I like who I’ve become since working with them. I don’t do what I do for recognition I do it because I love it, of what the girls give to me, so to be recognised in such a way is really very humbling.”

Charlotte Quinn, a Member of Heywood Senior Section said: “Guiding has always been such a huge part of my life, I’ve made friendships for life and have developed skills and myself in a number of ways! I volunteer within guiding for my love of it, and to receive a nomination was humbling although it definitely wasn’t something I expected. The celebration event was brilliant- I not only celebrated with people I know and love but I was introduced to more lovely people in the guiding family all around the North West! It was an excellent day that I feel privileged to have had a part of.”

Rosie Richards, a Member of 44th Rochdale Senior Section said: Guiding has had a major influence on my life and personal development – without Guiding I would not have had the same experiences and I would not be the person I am today. Guiding has taken me around the world from Peru and Chile to Japan and has given me skills which have helped me professionally. But most importantly Guiding offers fun, friendship and a supportive environment for girls to thrive in. I am delighted to have been nominated as a Guiding Idol. Over the years I have benefited enormously from the help and support of my own personal Guiding Idols and I am please to be able to offer similar inspiration to others. I am looking forward to starting my new role as the County International Advisor and supporting more girls access international opportunities.”

Jess Timperley, also a Member of 44th Rochdale Senior Section said: “So sad that I couldn’t make it to the celebration event. I was really surprised and honoured to be chosen as a Guiding Idol. Guiding has been, and continues to be a huge part of my life. What I love most is the opportunity to meet so many inspiring women and make so many amazing friends within the Guiding community.’”

Louise Cope, Leader of Tottington Rangers said: Girlguiding has been in my blood since joining Brownies (there were no rainbows when I started guiding!). Once I joined our local Ranger unit at 14 years old I knew that this was the age group I wanted to work with. I have been with that same Ranger group as a Ranger, Assistant Leader and Leader since that day. The number of girls I have seen flourish as independent, confident individuals in that time has been humbling.  Senior Section is a challenging age group, supporting girls, not just through their Guiding, but through their GCSE’s, their A-Levels, their driving tests, their relationships and other key moments in their lives. I feel so proud when I see or hear of their successes in graduation, travelling abroad, securing careers, getting married and starting families. To have been nominated for a Guiding Idol award was an amazing surprise but seeing all those girls succeed in life and hoping that I have played a key part in that success is what Girlguiding is all about, our sense of achievement as leaders and that is the greater reward.”

Julie Bell, Region Chief Commissioner, said: “Once again, we’ve had a fantastic response to the Guiding Idols campaign and we’re looking forward to doing it all over again next year. We wanted to thank our volunteers for all the hard work and effort they put into Girlguiding and with the support of our young members, we’ve been able to celebrate our amazing volunteers in a really memorable way.”

Guiding is active across the whole of the UK and in the North West of England we have 14,619 inspirational volunteers who give their time where they can. We welcome volunteers from all backgrounds, ages, cultures, faiths and abilities.

If you have a couple of hours to give or want to volunteer on a regular basis, explore Girlguiding’s flexible opportunities at www.girlguiding.org.uk/interested

The Guiding Idols campaign launched for its third time in April and ran until May. During this time, Girlguiding North West England members were asked to nominate inspirational volunteers to become 2015 Guiding Idols.

Overall, 129 nominations were received and a youth panel selected 63 of these to become this year’s Guiding Idols. The final Guiding Idols are volunteers from across the North West of England. The campaign culminated with a celebration afternoon at the regional headquarters on the last day of national Volunteers’ Week, Sunday 12th June.

The campaign first launched in 2014, as part of Girlguiding North West England’s support for Volunteers’ Week – a national celebration week that sees organisations thank their volunteers.