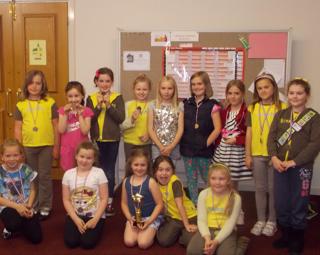 Girlguiding volunteers Helen McCreadie from Bury, and Ellen Hendry and Martina Caraher from Rochdale, received an unforgettable surprise when a group of girls and young women recognised them for their volunteer efforts.

Helen, a Guide Leader with 3rd Ramsbottom Guides, Ellen a Brownie Leader with 43rd Rochdale Brownies, and Martina a Rainbow Leader with 1st St Michael’s Rainbows have recently been named as three of the forty-eight ‘Guiding Idols’ in Girlguiding North West England – a brand new project led by the regional charity to recognise its volunteers for their fantastic work.

The ‘Guiding Idols’ campaign was introduced for the first time ever this June, as part of Girlguiding North West England’s support for Volunteers’ Week – a national celebration week that sees organisations thank their volunteers.

Girlguiding North West England members were asked to nominate a Guiding Idol – a volunteer that they felt was an inspirational role model. Following the nominations, a youth panel of girls and young women, aged 7 to fourteen, were tasked with the difficult challenge of selecting nominees from each of the charity’s seventeen guiding counties.

The youth panel announced that they had selected 48 volunteers from across the North West and that each Guiding Idol would be invited to attend a special celebration afternoon on July 27th 2014 at Girlguiding North West England’s Region Headquarters in Preston.

The event included a thought-provoking planting activity, a pick ‘n’ mix sweet cart for the Guiding Idols and an afternoon tea with a twist. Amid the celebrations, Helen, Ellen and Martina received a Region Thanks badge from the Region Chief Commissioner, Julie Bell, and had yet another surprise when a plaque was unveiled in the Region Headquarters’ garden – a memorable tribute that named all forty-eight Guiding Idols for their achievement.

Helen was nominated by Guides and fellow Leaders in Ramsbottom for being a true role model – for giving her time as a volunteer within Guiding, and for raising a phenomenal £6,500 for breast, cervical and ovarian cancer charities in memory of her twin, who was also a Brownie Leader.

Helen said:“I feel very privileged to have been nominated as a Guiding Idol, and the thanks badge that I received will make a beautiful addition to my badgetab!”

Ellen has been involved in Guiding for over 50 years. She was nominated by Brownies past and present for being ‘the best Brown Owl ever’ and for providing great opportunities for the girls in the pack – opportunities that have included pack holidays, dancing at the Liverpool Echo Arena and visiting Disneyland Paris.

Ellen said: “It was a surprise to be nominated as a Guiding Idol, I had such a lovely day – it was quite emotional. I was amazed that Brownies who have left the unit and the present Brownies had remembered so much of all the things we have done.”

Martina was nominated for volunteering to become a leader when the Rainbow Unit was about to close, allowing girls in the area to continue to benefit from the great experiences Guiding provides.

“I had a wonderful day at Region Headquarters” said Martina “I was reduced to tears when the wall plaque was revealed. Thank you to everyone for my nomination”.

Julie Bell, Region Chief Commissioner, said: “We’ve had a fantastic response to the launch of the Guiding Idols campaign and we’re looking forward to doing it all over again next year. We wanted to thank our volunteers for all the hard work and effort they put into Girlguiding and with the support of our young members, we’ve been able to celebrate our amazing volunteers in a really memorable way.”

Guiding is active across the whole of the UK and in the North West of England we have 14,619 inspirational volunteers who give their time where they can. We welcome volunteers from all backgrounds, ages, cultures, faiths and abilities.